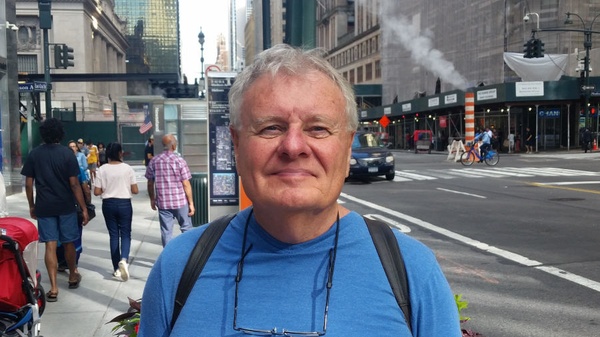 Bill passed away April 25th  of complications of coronavirus. Just 4 weeks ago he was a strong,

vital energetic man with a knowing smile, full of life and emotion, sensitive to the injustices of the world. Bill was born into a large family of 9 children. Being the youngest he experienced the complex dynamic of family life, and with 3 deaf sisters he began to understand life’s injustices at an early age. He was empathetic as a young person. Family influenced his perspective. He loved

people. Bill was a gregarious person. His amused joyful smile reflected that.

As a young man, Bill was anxious and enthusiastic for adventures he’d not been able to

experience. He was determined to make things happen, sailing the Caribbean, hiking to the opening of the St Lawrence Seaway, traveling to the Bay area, inspiring his attraction to Northern California.

Bill was also determined to put himself through school. Always working full time, with

persistence he eventually graduated from the University of Wisconsin with degrees in Speech Communications and Physical Education. He taught in Milwaukee area schools for several years including the Milwaukee public School system. Not stimulated by this environment, his long held dream to go to Australia loomed. With friend David and others, he was hired as a teacher for the teacher shortage there and was soon living and working in Sydney, New South Wales, arguably one of the worlds most beautiful cities. This 3 year experience was exceptional, but family loomed. He returned to Milwaukee to care for ageing parents, until their deaths.

Bill was an admirer of English writer Samuel Johnson, and travelled to England for a long walk through the English countryside, pastures and villages, some haunts of Mr Johnson . He loved this exhilarating experience so much that he got a job in a village pub, lived upstairs and had the most memorable time for almost a year. He never forgot or regretted this experience. He wanted to live life.

Bill eventually moved to San Jose, California, where he lived for years. He opened a coffee shop, among several work ventures. Bill experienced chronic back pain and worked around this disability of degenerating disks by rigorous therapeutic workouts. His Physical Education training was helpful in building strength and somewhat controlling pain.

Eventually Bill moved to the New York area to be near family members after a heart event. Bill’s niece, Suzanne introduced him to many members of the local community as Uncle Bill.

He is still fondly known by many as Uncle Bill. He and his partner Dave explored and appreciated the cultural features of Manhattan. He loved NY.

Bill was a giving presence, an uncomplicated man, passionate about the injustices of life. His smile made everything good.

To order memorial trees or send flowers to the family in memory of William Whipp, please visit our flower store.