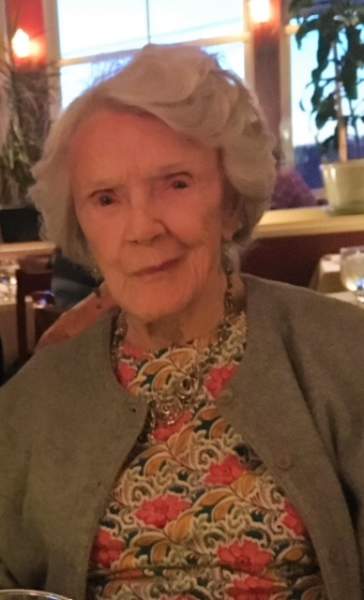 Jean Phillips Bradford died in her home in Garrison on December 30.  She was 97 years old and had lived in Garrison for five years, after moving from her home in Washington D.C to be closer to her daughter and son-in-law.

Jean was born in Chicago in 1920.  After losing her first husband, an Air Force pilot, in World War II, she married Saxton Bradford, a foreign service officer.  Over the years they lived in Japan, Spain, Mexico and Washington, D.C.  After his death in 1966, she joined the rest of her family in Phoenix, Arizona, where she pursued a career in health care before eventually moving back to Washington D.C.

During her early years in Washington, Jean had an ownership interest in a contemporary art gallery and she continued to pursue her interest in art throughout her life, both by developing her own collection and by donating time to the National Museum of Women in the Arts and the Katzen Arts Center at American University.  After moving to Garrison, she continued to add to her collection by purchasing the work of local artists.

During the last five years of her life, Jean’s favorite activities were visiting the shops on Main Street in Cold Spring, taking walks at Boscobel, and attending Friday night soirees at the Antipodean Book Store, activities which resulted in many new friendships.

A memorial gathering will be held at the Parish Hall at The Episcopal Church of St. Mary in the Highlands in Cold Spring on Saturday, January 13, 2018 at 4 p.m.

To order memorial trees or send flowers to the family in memory of Jean Bradford, please visit our flower store.