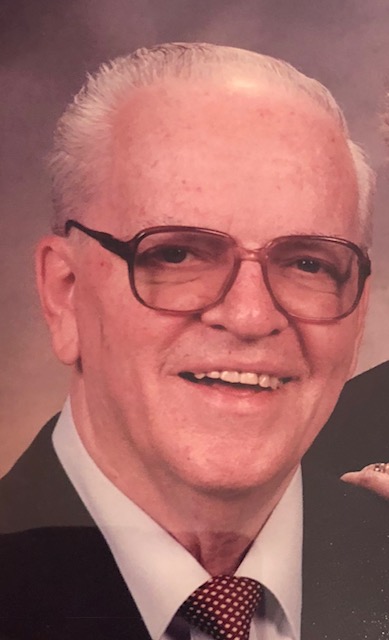 Louis R. Thorpe of Cold Spring passed away peacefully on November 21, 2017 surrounded by his family.  Born on January 30, 1931 in Nelsonville to the late Charles and Alice McElrath Thorpe, he was a proud Veteran of the United States Air Force serving during the Korean War.   Lou was a 1948 graduate of Haldane High School and later retired from IBM where he worked for 30 years.  He was the former Fire Chief of the Nelsonville Fire Company, former Nelsonville Village Clerk, the past President of and coach for many years at the Philipstown Little League and an avid New York Yankee and New York Giants fan.

He is survived by his loving children , Terrance J. Thorpe and his wife Faye, Louis M. Thorpe, Kathyrine M. Tomann and her husband Peter, cherished grandchildren Robert, Lauren, Michael and his wife Danielle, Reid, Kiefer and Wilson Thorpe and Grace, Meghan, Emily and Maura Tomann.  He was predeceased by his beloved wife Kathyrine Thorpe in 2013 and his siblings  Marian Thom, Mildred Morgan, Dorothy Vigilio, and C. Richard Thorpe.

Upon his retirement from IBM in 1991 he devoted his life to spending time with the love of his life, his bride, his wife, Kathy (Sooky). They enjoyed taking trips with the seniors, going to casinos, and heading to the race track. Lou and Sooky made sure to attend all their grandchildrens' sporting events, graduations and plays. He would love to reminisce about Little League, especially with all his former players. People in town could set their watches when Lou got his daily newspaper, drove to the Foodtown parking lot or scooped the loop.

A Mass of Christian Burial will be celebrated on Monday November 27, 2017 at 10am at Our Lady of Loretto Church, 24 Fair Street, Cold Spring.  Interment will follow in Cold Spring Cemetery.

For Louis' Guestbook or to light a candle please visit www.clintonfh.com

To order memorial trees or send flowers to the family in memory of Louis Thorpe, please visit our flower store.