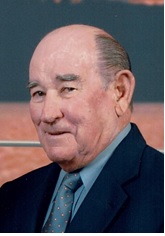 Robert S. Galligan passed away peacefully on January 15, 2018, at the age of 87, at his daughter’s house in Cold Spring.

Robert was born on August 30, 1930, in a house on Parrott Street, Cold Spring, to Joseph Galligan and Margaret MacLean Galligan. His wife of 58 years, Alberta (Chickie) Jesek Galligan, predeceased him on Sept 11, 2017. Robert was a long-time resident of Cold Spring and Jensen Beach Florida, where he and his wife retired to.  Bob loved fishing in the ocean and the Hudson River, along with boating. He very much enjoyed spending time with his family.

Robert was a Korean War Veteran, he served in the 5th Regimental Combat Team from 1950 to 1953, he was also part of the RCT 101 Airborne regiment. While in the Army he witnessed the atomic bomb testing in the Nevada desert.

Bob worked at Fishkill Correctional Facility (Matawan) for 25 years as a NYS Correctional Officer. He was also in Local 235 Laborers Union.

During his life he was very involved in the community. He was a witness to the founding of the Cold Spring Boat Club, July 3rd, 1955. He was a charter member along with being a life member. He was also a past commodore. Robert was one of the founders of the North Highlands Fire Co.  He signed up in September 1969, and North Highlands became a fire company in January 1970.  He was an ex Chief, a past Fire Commander and a life member.

Robert was a life member of the Cold Spring VFW and American Legion.  He was also a member of the American Veterans Post 92, and the Elks Club in Florida.

Bob is survived by his sister Dorothy Galligan Kuenzler, her late husband Walter Kuenzler, his brother in law John Jesek and his wife Judie,his nephews Thomas Kuenzler and John Jesek and his wife Mindy, his niece Heidi Smith and her husband Tim and Elizabeth Jesek Barcavage and her husband Dennis along with many great nieces and nephews and great-great nieces and nephews.

Family and friends may call on Saturday, Jan. 27, 2018, from 9:30 to 10:00 at Clinton Funeral Home, 21 Parrott Street, Cold Spring.  A funeral service will be held at 10:00 am at the funeral home with interment to follow in the Cold Spring Cemetery. In lieu of flowers a donation can be made to North Highland Fire Department. 504 Fishkill Rd. Cold Spring NY, 10516

For Robert’s Guestbook or to send a sympathy message please visit www.clintonfh.com.

To order memorial trees or send flowers to the family in memory of Robert Galligan, please visit our flower store.