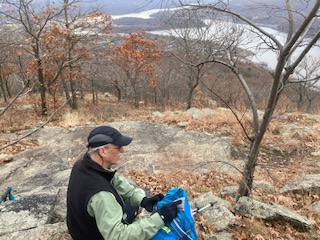 Stephen loved Cold Spring since the day he got off the Metro North Train from Manhattan, early in 1993, having read a “Thinking of Moving to Cold Spring” article in the New York Times. He was undaunted by the Superfund site, and loved eating blueberries atop Bull Hill. He and his life partner and wife Judith moved there almost immediately after that first visit. He loved being able to walk to the train and the grocery store. He was dedicated to his gardens which have evolved over the years, featuring many native species in support of birds and pollinators. Recently he and Judith began thinking of downsizing to other places but every time Stephen considered moving elsewhere, he would come home, look at the river and Storm King and declare there was no place better to live.

Stephen was born in Bronxville, NY, after which his family moved to Allentown, PA. He attended Parkland High School where he participated in four different varsity sports every year, and also starred in Guys and Dolls as Nathan Detroit.

Stephen matriculated at Yale University in 1968,  but the anti-war movement intervened so he left to dedicate his time to social justice causes, including editing an underground newspaper and traveling to Cuba as part of the Venceremos Brigades. After marrying Judith Kepner in 1982, he returned to Yale, graduating with a BA in Art in 1986. He later received an MA from Columbia University Teachers College which led to a long career as an art and art history educator at The Hewitt School in Manhattan. He loved teaching art as metaphor and taking the students to museums and gallery shows.

After retirement (a word he disliked because it sounded too much like inactivity) he was a member of Gallery 66 in Cold Spring, and showed his emotionally complex, colorful, and varied paintings in many venues. He also volunteered doing local trail repairs, and more recently, spent his time doing invasive species identification and removal. With others he planned and installed the new pollinator garden at West Point Foundry Park in 2021.

Stephen is predeceased by his parents Rosalie and R.William Rose and survived by his wife of 40 years Judith Kepner Rose, sisters Susan Rose Ackerman, and Barbara Rose Caldwell, and many wonderful nieces and nephews.

Services will be private at a later date. If you knew Steve, please consider planting a native plant somewhere in his honor. The bees and birds will appreciate it.
Funeral Arrangements are entrusted to Clinton Funeral Home-Cold Spring

To order memorial trees or send flowers to the family in memory of Stephen Gould Rose, please visit our flower store.